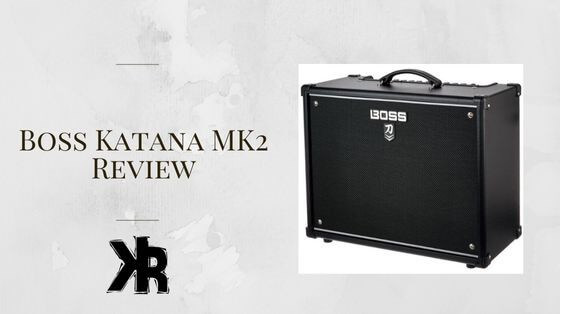 The Boss Katana 100 MK2 is a Digital Signal Processor (DSP) amplifier. It’s programmed to give you five amp voicing and five independent effect sections. The amplifier is a combo with one 12″ speaker. It also features variable power control and a stereo expand option. This will allow you to run multiple Katana amps in stereo. The Boss Tone Studio lets you customize your sounds quickly and easily!

This amplifier has been the most talked about for a few years now because of its great sound. Coming in at under 500 bucks, and is available in a few different formats. It has something for pretty much everyone!

Let’s have a look at some key specs!

You may already own a Katana MK1 and are just exploring the MK2 to see if it is worth the upgrade. Some changes are only found in the 100-watt version, which is why we reviewed this model. But rest assured, an upgrade to any of the MK2 models will add more to your rig! Here is a quick look at the differences.

The variation button is found throughout the MK2 models and expands on the amount of voicing the Katana has to offer. Once you activate this feature, you are provided a different variation of the 5 already well known presets.

You could essentially consider these 10 voicing to play with, up from only 5 on the MK1.

On the MK1, the number of effects that could be used simultaneously was 3. But on the MK2 they have increased that to 5! Not only that, but they have also included more effects on top of that! MK1 was 55 effects total, but the MK2 has 60 effects to offer.

Another new option on all MK2 models is the power amp IN jack. This jack allows you to bypass the Katana preamp and run an input directly into the power map on the Katana. This can be handy if you want top run another modeler, preamp, or amp simulator into the power amp.

This is a new option exclusive to the 100-watt version. It’s a great option that allows you to connect two 100 Watt Katana amps together and run them in true stereo. Talk about a powerful rig!

The Boss Tone Studio editor has also undergone some changes. The interface has been changed for a fresh look and feel. Some parameters have been moved around to make it more convenient when editing.

The controls are available from the top of the amplifier for easy access and feature a modern look. If you are familiar with the MK1 version of the Boss Katana, nothing is really that different. The Amplifier looks exactly the same except for the front logo and some added controls and jacks.

The handle is mounted more or less in the center, making the amp easy to carry. The grill cloth on the amp is a standard knit that is found on a lot of amplifiers, but looks great on the Katana. Overall, the amplifier is well-made and still looks great in the MK2 series.

The Boss Katana MK2 still has a familiar control scheme that is intuitive and easy to use. The preamp provides 5 different amp voices. You get great clean, crunch, brown, and lead plus an acoustic setting. But what’s really cool is the MK2 version now features a variation control!

This provides a different variation of each of the 5 voicings. This essentially makes these 10 different sounds!

The MK2 version comes with the ability to choose from over 60 built-in Boss effects. All by using the dedicated software. Boss has also gone ahead and provided the ability to use 5 of them at the same time, up from 3 on the MK1.

The controls for the effects are also different in the sense that the knobs are far easier to use. Selecting effects is so much easier than on the MK1.

On the rear of the amplifier, you will find the headphone output, aux In, effects loop, and foot switch jacks. Boss has now added some new features to the 100-watt version.

It’s called stereo expand and allows you to connect two boss Katana MK2 amps together and run them in stereo! And if that isn’t already super cool, they have also added a power amp in connection. This allows you to run any preamp or modeler into the Katana Power amp.

The Boss Katana MK2 is very powerful with 100 watts of output! Playing the amp in a live band setting, we were easily able to keep up with a hard-hitting drummer. So don’t worry about volume, the Katana 100 will do what you need and then some, just like the MK1!

The amplifier also has a variable power switch to allow you to cut the power down to 50 watts or .5W for quiet use. If you prefer the 50-watt model, there is also one available.

The Boss Tone Studio software has also had some changes. The interface has been updated. Some parameters have been moved to the main screen for more convenience.

There is also a dedicated pedal FX category! Selecting your effects, channel EQ, setting up effects, and channel presets. It’s all possible with the new Tone Studio.

Customizing your sound is super easy! And if you have patches from an MK1, you can import and use them on the MK2!

The effects loop on the Katana 100 works very well. We ran some standard modulation-type effects in the loop and were pleased overall.

The Loop is buffered and so there did not seem to be any loss of quality in the sound. The effects loop is found after the preamp but before the onboard effects in the circuit. But rest assured, you can use pedals in the effects loop with the built-in effects at the same time.

The first version of the Katana was a home run for Boss from a sound perspective. There were some sounds that could have been better, but it was a great amp for the money!

Boss has improved it all and provided more! The MK2 is an excellent amp! With the improved sounds, added effects, and improved software. You cannot afford to go another day without one!

The sound of each of the voices has been improved. They really made the amp sound more like a tube amp than the first version. The feel of the amp is also changed and seems less digital and maybe more analog. But I don’t have an MK1 here to test it up against to be sure.

What I am sure about, is that this is a superb upgrade when compared to the MK1! For an amplifier under $500, the effects sound great! I am pretty impressed with the way this amp sounds and feels, it truly is a powerful tool.

If you own an MK1, you will want to try this amp, just be prepared because you are going to want to upgrade!

If you have decided to get a Katana, you might have wondered about its durability. If you plan to use this amplifier to gig with, then it must be reliable. I have found this amplifier to be very robust and made well.

The circuit boards are assembled with surface mount components. Each of which is of good quality. The wiring and connections are made well and are rigid. The assembly of the enclosure is also durable. This amplifier has been on the market for some time now and many musicians use it. All without issues.

Boss makes a good product and the Katana is no exception. You can rely on this amplifier and count on reliability for years to come!

Other Amps to Consider

If the Boss Katana isn’t exactly what you think will be a good fit, there are a few other amps that are also a good choice.

Code 50 is another great digital modeling amplifier made by Marshall. It features some great sounds and effects and is very affordable. We have a great review touching on all the points.

Peavey also has a great digital modeling amplifier with good effects, and is 40 watts. It offers recording connections and some great options to be an all-in-one amp.

If you are looking for an amplifier in the under $500 category, there is a lot to choose from. But we were very impressed with the Katana MK2! It sounded pretty good as soon as we jumped in and started using it. Even before tweaking the EQ a bunch.

Now, if you have some high-end amps, well you might not be knocked out of your seat. But it’s awesome for beginners. And the sounds are somewhere between fantastic and great. If you are in the market for a Swiss army knife-type amplifier, you probably found it.

Boss also makes a 50-watt version of the Katana which you might also like. Yet it does not come with an effects loop. The 100-watt version comes with a 50-watt setting for only a few extra dollars. This is more bang for your hard-earned buck.

It might make more sense to go big or go home with the Katana and just grab the 100-watt version. Both the Katana MK1 and MK2 are great amps. The addition of a few more sounds and features does make the upgrade worth it.

It’s also got tons of power and some great versatility. Plus, it will serve many needs of players today, and it’s a hard one to pass on for the price. We enjoyed the amp and rate this one quite high for this price point!