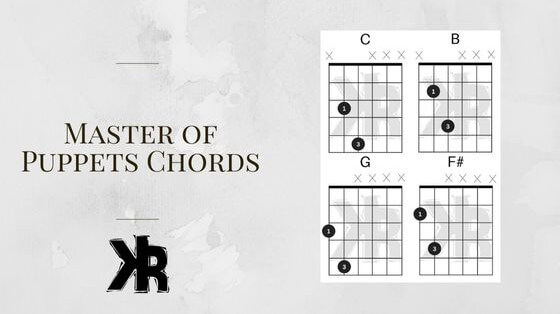 Ever try to learn how to play Metallica’s Master of Puppets on guitar? Then you know that it can be a daunting task. The chords are tricky, and the solo is even more challenging. But with a little bit of practice, you can master this song. Then go on to impress your friends and fellow metalheads alike.

In this article, we are going to look into the Metallica chords for Master of Puppets and how to play the song.

As we mentioned before, the chords for this song can be quite challenging. If you are a beginner guitarist, we recommend starting with some simpler songs. At least before attempting to play Master of Puppets. Yet, if you are an intermediate or advanced player, you should be able to tackle this song with relative ease.

The first thing you need to know is that the song is played in standard tuning. It’s played with pretty much nothing but down strokes and is a pretty fast tempo. We also recommend that you play this song with an electric guitar for the right tone. You can find the amp settings here.

Chord Chart for Master Of Puppets

With Master of Puppets, you will find that it’s composed of all power chords and lead licks. The song is played very fast. So power chords are the best way to pull this off with the aggressive tone they provide. Some of the power chords used can be seen in the chart below.

How to Play Master Of Puppets with Tabs

The song itself is relatively easy. But it’s fast and does need a strong fretting hand and accurate picking.

When learning to play the intro to Master Of Puppets, it’s important to take it slow at first. Keeping in mind that this is all done with down strokes with the picking hand. There are a series of chords, but some single notes in rapid succession as well. You can see this in the tablature diagram below.

This is repeated 3 times and is quite easy to play once you memorize the notes and the picking needed. Your hand may get a good workout if you don’t normally play this fast.

The next part jumps into another fast tempo with some aggressive fretting handwork. The picking is still all down strokes, except when you need to press the second fret on the A string twice. Here, one upstroke will make it a bit easier. Here are the tabs, play this part twice.

If you’re following along to the song, you will now hear that the part above is continued. But there are a few small changes made. Here are the tabs for this new part. It’s played the same with a few notes added in and then a final bar to go into the first verse. Follow the tabs below.

If you have successfully played the intro, then the verse will be quite easy. The E string is played 8 times before inserting any chords. This can be done with a series of down and upstrokes. The chords will be played using down strokes and some quick slides between them.

The pre-chorus is like the verse. It can be played using up and down strokes, except now the chords are a series of hammer-ons as well. The first part is played twice, while the following bar makes its way into the chorus.

The Master of Puppets chorus is also quite easy to play. It simply requires some memorization and practice to get the flow of the song. There are some hammer-ons and fast tempo down-picking. But otherwise, it’s easy to play if you have the other parts mastered! The tabs for the chorus can be found below.

We also have Metallica’s Nothing Else Matters chords here!

Tips To Play Master OF Puppets

This song requires good hand strength and calluses on the fretting hand. It’s not an easy song, but should only take a few days to get going with if you’re at least an intermediate player. Here are a few tips to help you.

With some work, this song is actually quite easy. There are a couple of parts that are difficult, and the picking will need to be figured out. But once you have it, then the rest of the song and the chords become easy to play. We haven’t included the solo or lead parts, as the chords should be mastered first.