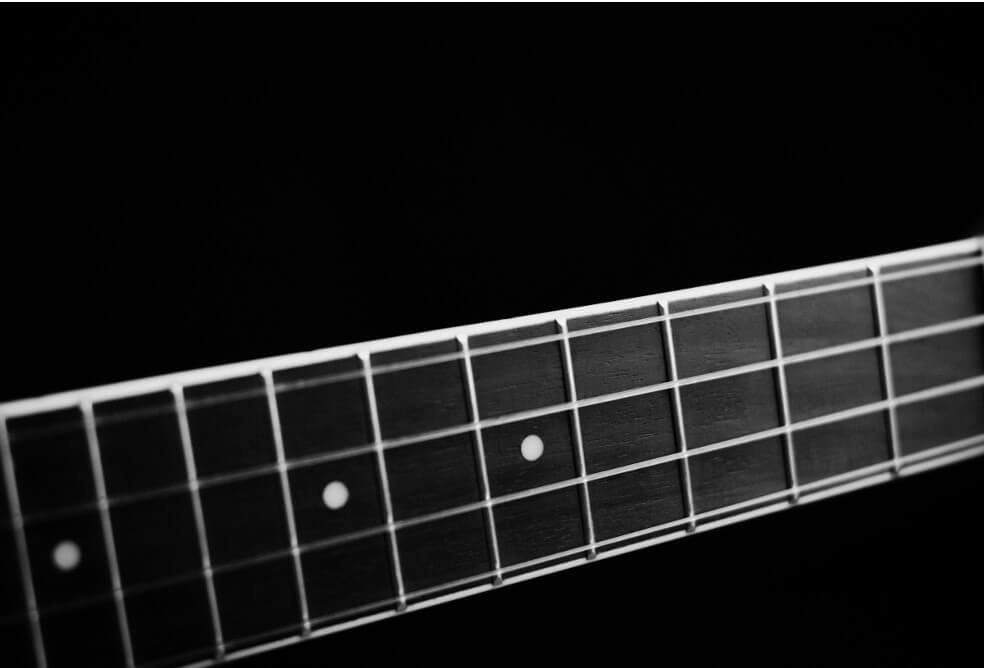 When getting started playing the guitar there are a lot of names that are important to know.

Some of them are very important names while others are not as crucial to know.

The fret on a guitar is a pretty important part! Knowing this part name and what it is, can help you tremendously.

So what is this part i speak of?

A fret on a guitar is a raised element, normally metal, that is embedded into the fingerboard. This raised element, determines the correct placement of a note on the fretboard.

By segmenting the fingerboard into sections using frets, we are able to play notes precisely without being flat or sharp much easier. 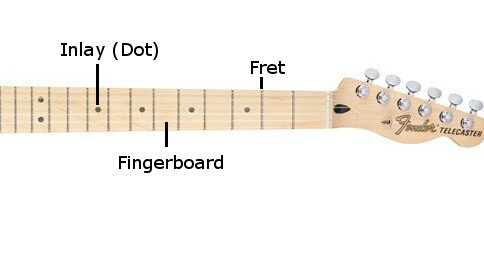 If you were to play a guitar with no frets on the fingerboard, you would need to press the string down on the exact spot necessary to play a note correctly.

If i were to want to play a “G” note on the 6th string of the guitar, i would need to press down  in the exact spot! Otherwise the note might be flat or sharp. (Check out our article on the guitar strings and their notes here.)

This can be difficult unless you really get to know the fingerboard of a fretless instrument well. This is possible of course, but takes some real practice and has a rather steep learning curve.

So is playing a fretless fingerboard less precise?

No not at all. In fact there are some advantages to playing without them.

The range of sounds that are obtainable from a fretless instrument are much greater! In fact, some eastern music is only possible thanks to this instrument.

But to most guitar players, especially in the western part of the world, the frets are part of the appeal and magic of the instrument!

If you consider a violin or a stand-up bass which have no frets, they use a bow to play the strings.

If you were to simply pluck a string on either of the two, you would notice the sound decay rather quickly. This bow is used to continually excite the string and keep it vibrating.

The reason for this is that the string pinched between the wooden board and the players finger cause the vibration to stop early.

Now, if we consider the guitar string being pressed against a hard fret rather than a soft finger, it can vibrate much longer. The allows the note to ring out longer until it is inaudible.

Now to the guitarist, sustain is something we brag about! Its a key element in playing the guitar and enjoying doing it!

I couldn’t imagine if the guitar didn’t have as much sustain, this wouldn’t be good at all! I mean all we have to do is pluck a string with a pick and have sustain for days!

Frets Add To The Feel of A Guitar

Most players don’t consider that frets contribute to how a guitar plays and feels. There are different sizes that can either benefit your play style or hinder it.

Its something that is overlooked when selecting a guitar.

Some are flat and low and require the string to be pressed right down in order to properly work.

This can make it harder with bends as you have to press the string right down to the wooden fretboard.

Low, flat frets however feel very smooth as you move around the fingerboard.

On hard rock or metal style guitars you might find them to be taller. They don’t require you to press as hard as they make contact with the string before you touch the fingerboard.

This might also give you a bit of a scalloped feel but requires a lighter touch.

This in turn may be better for faster playing and great for easy bends.

Its always a good idea to test out a few guitars to get an idea of what you prefer.

Every player has a preference, its just most of them just assume frets are all the same.

Frets Wear Out Over Time

Frets like strings wear out over time. And as they begin to wear out, they develop buzz, intonation issues and discomfort.

This is something that happens slowly and can’t be hard to diagnose if you get use to the worn frets. This is usually the case.

But once wear sets in, they flatten, develop indents and begin to vibrate..

Luckily, frets can be replaced by a good guitar Luthier and normally doesn’t cost too much. So its always a good idea to inspect them when changing your strings.

This will at least give you an indication that they are slowly wearing and alert you to the need for replacement.

Frets are commonly made from nickel silver, and players who press hard may go through them quite quickly.

Stainless steel is also an option which is harder and smoother then nickel silver. They will basically prevent wear and should be considered if you press harder than most players.

Some people do say that stainless steel frets sound different then nickel silver.

So its always best to test on a guitar loaded with them before changing over.

Frets Need To Be Replaced

Now, while i did say that frets wear out like strings do, that doesn’t mean you should change them on your own.

Most guitar players eventually learn how to replace their own strings, and i encourage that. You don’t want to have to take it in every time you break a string.

With frets however, this is a specialized job that should be left to the pros. This is because they are pressed into the fingerboard of a guitar.

There are small grooves that the frets fit into and this needs to be done correctly. You don’t want to damage your guitar neck because you attempted to change them!

This is more common then you think, believe me.

There is quite a task in changing frets. Once you actually remove them and install new ones, they all have to be set to the same height.

This takes time and the right tools to install on a guitar neck. So trust a good Luthier to do the job, and don’t fret about it.

What Is A Fret On A Guitar?

The fret is a pretty important little part of the guitar. Without it we wouldn’t quite have the same experience as we do today.

Some of the most amazing solos and chord progressions are a result of that little fret.

And while it isn’t a dynamic part of the guitar anatomy, it needs to be checked regularly for optimal results.

So test out a few guitars and see what style you like best for your music.

Now that you know a little bit more about the fret, it could change your experience as a player!

Care to learn about other parts? Check out our article on guitar part names and what they do.

How Much Should I Practice Guitar Each Day?

What Guitar Should I Buy? | 10 Tips To Quiz Yourself

Get Killer content delivered to your inbox! Join our community!