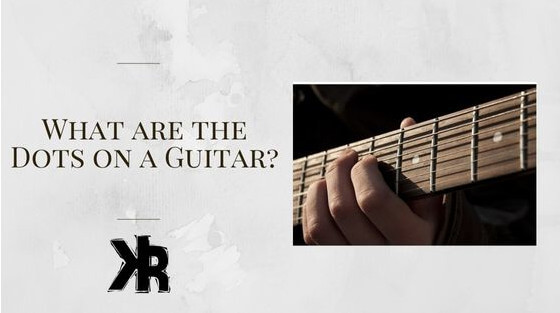 Often, guitars have several dots along their necks. But what are the dots on a guitar fretboard called?

The dots on a fretboard are called fret markers or inlays. These are the terms used to refer to these indicators along the guitar’s neck. They are used to quickly show you where certain frets are on the guitar.

Truth is, most players don’t know their purpose. The benefit of using these indicators can make a player faster and more accurate. As musicians, sometimes we miss the little details that can help us become great players.

Let’s explore these dots along the guitar neck and see if they can help us up our game!

What Are The Dots on a Guitar Fretboard?

Having fretboard markers serves to create a kind of map for the player to navigate the neck. While the total number of frets varies, the dots are placed on the same fret positions. Many electric guitars have somewhere between 22 and 24, while an acoustic often has fewer.

This way you will always know where you are on the fretboard even if you pick up a guitar you have never seen before.

There might be a few exceptions to this rule where a marker is missing from the commonly used 3rd position. Or, instead, has a marker at the 1st. But other than these differences, the indicator patterns are standard across guitars.

If you come across a model with no fretboard markers, you will still have indicators to guide you! They are called Side fret markers.

Why Are Fret Markers Placed Where They Are?

When you begin to understand the pattern and layout, the ability to play notes begins to speed up. This can really help you learn how to change chords faster as a beginner. If you have been playing for a while, try to take advantage of these fretboard markers. They can help you improve your technique.

One of the biggest advantages in improving as a player is to learn the guitar fret board and notes.

Two Dots On the 12th Fret

The 12th fret features a double dot on a guitar, as opposed to the single marker found on the other positions. This is to denote the point at which the notes repeat (one octave higher).

To explain this concept a little more clearly, recall that the typical guitar has 6 strings. Starting from low to high and in standard tuning, the open strings play the notes E, A, D, G, B, and finally E, respectively. If we start at the low E and play that string without using our fretting hand, we simply play an open E note.

Placing your finger on the first position plays the F note, and so forth. By the time you reach the 12th, you are playing an E once again. Except now, it is one octave higher than when you played it open.

This is true for all strings. So the open A on the 5th string repeats at fret 12. Playing an A note one octave higher than playing the string open.

The double dot serves to remind the player where the point on the neck is that the notes begin to repeat. The double dots are unique fretboard markers not found elsewhere on the neck. This makes them easily recognizable.

Why It’s Important To Know Where the Markers Are

As noted above, it serves as a map. If you know that the 3rd fret features the first marker, you can find it without having to think about it. Granted, it’s easy to count up 3 frets along the neck.

But it does get more cumbersome if you have to try to count where the 9th position lies, for example. But the pattern of fretboard markers helps you recognize the position. This way you can play more smoothly and efficiently.

Learning the notes on the fretboard is often considering a hard task. It requires studying and memorization. Without markers, it would be even harder!

They help you associate notes with individual frets and truly assist with memorization. For example, you might know that position 3 on the low E string is the G note. Swapping up a whole step to the next (5th) will land you on the A note, and so on and so forth.

Not all guitar fretboard markers are dots. Although this is a commonly used marker, there are plenty of variations out there on the market. Technically, you can have any inlay style you want on your fretboard. But this will require work in order to design your own custom inlays.

Plenty of guitar manufacturers have unique marks. They still follow the pattern of placement, though, while providing a different style.

PRS, for example, is well known for having a dove pattern along their fretboards. Jackson guitars often use what is denoted as a shark fin-type marker. This enhances the tough, sharp appearance of their instruments.

Gibson and Epiphone often use large blocks along their guitar necks. Some models still feature dots but place them at different spots. This is near the top or bottom of the fret, rather than the usual position in the very center.

Some guitarists even opt for using LED dot indicators. Not only does this provide a visual experience, it also helps the player see them in the dark. You don’t have to be playing dark venues to appreciate the LED fret markers.

Some players use different color LEDs to distinguish between the different positions. This in itself just looks cool as they glow in the dark, although it isn’t for everyone.

There is no rule to the color or shape of fretboard markers used. Much of the choice comes down to personal tastes. Some prefer the traditional dot or block inlays. Others opt for a more aggressive shark fin or even skull pattern along their guitar’s necks. Even the absence of any inlay on the fretboard altogether.

Guitars Without White Dots Or Markers

Now that you know what these dots on a guitar are used for, I’m sure in time you will see some without any at all. There are some models that do not have them for reference. These are normally traditional or classical instruments.

The conception of the guitar began without any fretboard markers at all. Players from time past had nothing of the sort to rely on. Players would become very good without them and work to memorize the positions. Relying more on muscle memory and motor skills.

Classical players are well-practiced and look at markers as a tool for beginners. They have the experience of playing with the fretboard memorized. The need for white dots or neck indicators is not required.

Players who are more traditional prefer to use guitars without them. This is to prevent becoming accustomed to relying on them.

The need to continue to rely on memory is a great challenge and will normally help us grow as players. So they tend to stay away from guitars with fret markers.

There are a few players who are in fact traditionalists, we do find some classical guitars with just a few dots. There are a number of people who are in favor of a couple of reference markers found on the side of the neck.

This can help simply with a reference point and nothing more. They do not rely on the dots to assist them to find the notes, just a point of reference.

You will not find indicators on the front of the neck or fretboard, just the side. These acoustic guitars use positions 5 and 7 as the markers, but like I said, only as a mid-point reference.

Can you Replace Fret Markers?

The white dots on a guitar can be replaced for those who desire a different look. If they are simply round, this modification is very possible. A large majority of inlay replacements are possible if what you already have is not your thing.

If you have large or decorative guitar inlays already, this is less possible. Changing out the circles requires drilling, measuring, and gluing in new ones.

Only if you’re just sticking with round dots. If you want a more decorative inlay, then a professional will be needed.

In the case of fancier guitar inlays, routing the spacing is required, and tight tolerances are a must. So while replacing or upgrading inlays is possible, not just anyone can do this. Not without chewing up your neck, anyway!

Perhaps you do not have dots or fretboard markers on your guitar and want to take advantage of the benefits. There are marker stickers on the market that can be put either on the fingerboard or the side of the neck.

There are also stickers that have notes on them that can be placed in the correct position. This can help you to immediately recognize the note and fret. Many new players take advantage of these stickers. They are getting great results memorizing them this way.

They are very cheap and can possibly help if you’re struggling to memorize the notes on the fretboard.

The dots on electric and acoustic guitars can be extremely helpful parts for all players. Not just beginners. Some people use them as part of their technique. Even though they have memorized the fretboard.

But if you are getting started, take advantage of guitar fretboard markers. Make them a part of how you learn. They will help you progress much quicker if you do!

Do you need fret markers?

While the dots on a guitar are used to help a player find any position on the fretboard, they are not required. This is more helpful to beginner and intermediate players. B it’s not necessary to play the guitar. Classical models don’t have them, and guitarists learn to play without them and very well.

How do you use fret markers on a guitar?

There are a few different ways that you can use fret markers on a guitar. The most common way is to place them on the fretboard in order to help you visualize where your fingers need to go. This can be especially helpful when you are first starting out, or if you are trying to learn a new song.

Another way that you can use fret markers is to help you memorize the notes on the guitar. If you place a fret marker on each note, it will be easier for you to remember where each one is located. You can also use them to help you find chords easier.

Why do classical guitars not have dots?

One of the things that make classical guitars unique is that they don’t have dots on their fingerboards. So why don’t they have dots?

Classical guitars are played in a position different from other models. When played held on your lap in a classical position, the fretboard cannot be seen.

Another reason is that this guitar style is a very old design. Purist classical players do not want the fret markers on their instruments. So some manufacturers do not use them.