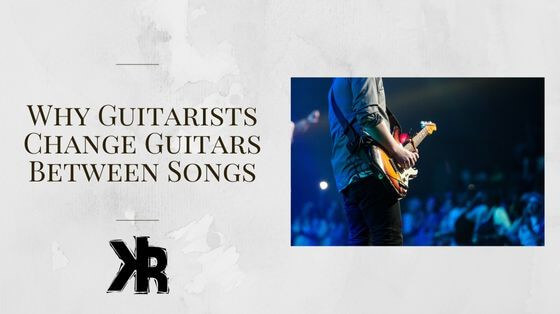 Professional guitarists playing concerts always seem to be changing guitars. This can be confusing to people who are new to guitar and wonder why they don’t just pick one and stick with it.

Every guitarist has their own unique style and sound. This makes them unique from other players. They want each song to have its own identity. This is where the gear change comes in. It’s not just changing out guitars between songs. But also the amps, pedals, and other accessories.

In this article, we’ll look at the reasons why guitarists change guitars between songs. We will also explore how they can do it efficiently so that they can be ready for the next song as soon as possible.

Why Do Musicians Change Guitars?

If you have ever been to a concert, you probably noticed many guitars being used. There are many reasons why they decide to change guitars between songs.

If a string breaks or they have technical issues. They will change the guitar to one that is working properly. Sometimes a different tuning variation is needed. Or, they need a guitar that sounds different for a certain song part. These are all reasons why a guitar change during a performance is necessary.

Some guitarists have a second guitar ready to go in case a string breaks. Others have a backup guitar tuned the same way as their main one. The most common malfunction is when the guitarist’s strap comes undone. All of a sudden, they can’t play their instrument anymore.

In the middle of a song, a musician may switch between two different guitars. This might be to compensate for a technical issue.

This is usually done to prevent any interruption in the music. The musicians that do this are typically skilled enough to play both guitars. All without having to get a feel for the new one. The speed of switching can be quick and seamless.

Because of Technical Issues

One way musicians deal with technical issues is to change guitars between songs. Or, the guitarists can switch to another guitar to avoid a potential issue that they see about to happen.

For example, if the musician has an issue with the tuning pegs of their guitar. Or, if they are using a vintage acoustic, and it is not functioning properly. Sometimes electronics could fail and a loss of sound results. There are many things that can go wrong.

The Guitar is Not Tuned Correctly

The instrument may have had an issue with tuning. And the guitarist has to change quickly between songs because of it. This may be a small issue for some, but it can be very frustrating for those who are playing in front of an audience.

Musicians will also change their guitars between songs because they do not want to take the time to tune it. Tuning a guitar can take up a lot of time, and many musicians don’t want to hinder the performance.

They Want to Change Their Sound

The sound of a guitar is determined by the shape of the body, the type of wood, and even the pickups. Some guitars even have chambers built into them that change the sound. Musicians use many guitars during a performance because they want a different tone.

This is a common practice for guitarists that want to change the sound of each song. They do this because they are looking to create different sounds or unique aspects of music.

Some musicians will switch guitars when they need something louder. While others will do it when they want something softer.

To Promote A New Product Range

Musicians change guitars between songs to promote a new product range. This is because they have several brands that they endorse. Changing guitars will advertise new lines or custom instruments.

There are a few guitarists that change models solely for show. The most famous example is Eddie Van Halen. He would change guitars between songs just to keep the audience entertained.

People do notice this when it happens, and in some cases, it keeps the guitar players in the crowd in awe.

Do Guitars Have Different Sounds?

Different guitars have unique sounds. This is due to the type of wood, the shape of the model, and the electronics. Several factors determine what sound a guitar makes.

Wood types include mahogany, maple, spruce, or rosewood. Guitars with these types of wood have a warmer sound than those made from others, such as ebony or Koa.

The shape also plays an important role in determining how a guitar sounds. This is because it affects how much vibration is created when you strum it. Finally, string material also impacts how your guitar sounds. Nylon strings create a softer sound. While steel provides a louder tone with more sustain and less decay.

The way that guitars are tuned also changes their sound. For example, a guitar tuned to drop D will produce a different sound than one in standard.

Do You Need Many Guitars For Different Tunings?

You don’t need to buy a new guitar for every tuning you want to use. If you are a guitarist who uses a few different tuning arrangements, one model can do almost all you need. If you are going from standard tuning to drop D, one guitar is all you need.

Most players who do this also have a good tuner that they use to quickly adjust between songs. It only takes a few seconds and can be done while the singer ques up the next song.

You may have some really different tuning arrangements for some songs. In this case, a second guitar would be required. This way you are not holding up the rest of the group, tuning your guitar. This doesn’t look good to the audience either.

Switching To a Guitar With More Strings For an Extended Range

Using guitars with more strings creates a deeper, warmer tone. This can be great to add new sounds to a roster of songs. Guitars with seven or eight strings have an expanded range. This is perfect for people who are looking for something new.

These sounds add a new element to songs, as they can be more heavy or full. This can be great for rhythm players looking to create a solid backend. These guitars are not only for heavy music types and can be used in jazz or Blues as well.

There are many players who switch between 6 and 7-string guitars to add more texture to their tone.

Can You Use any Guitar for Any Genre?

No, you cannot use any guitar for any genre. It’s a common misconception that you can use the same guitar for all genres of music. For example, using a Fender Stratocaster to play metal. This would not be ideal because it has a bright and treble tone.

The metal genre requires guitars with heavy distortion and fat low-end frequencies. Most players know the sound they want for certain song parts. So they go after a particular guitar type and platform. Guitars are very versatile, but they are not always perfect for every music style.

How Many Guitars Does an Average guitarist own?

This is a popular question among guitarists. The answer to this question depends on the kind of guitarist you are. If you are a beginner, then it’s likely that you will have only one guitar. If you are an intermediate or advanced player, then you are more likely to have many guitars.

The average number of guitars for an intermediate or advanced player can range from 4 to 5 models. Sometimes far more! Just make sure to have good instrument insurance on them. Especially if you start a decent collection!

How Many Guitars Should a Guitarist Have?

This is a difficult question to answer because there are several factors to consider. The first factor is the type of guitar you play.

Acoustic players typically only need one or two guitars. Electric guitarists may need 3 or more. Depending on the number of different sounds you desire for your performances.

The second factor is your skill level. A beginner guitarist may only need one, but someone who is advanced might need more.

How Many Guitars Do You Need?

Some people may wonder how many guitars they need. It depends on the type of guitar or the style of music you are playing. If you are a guitarist who likes to play folk music, then you only require a couple of models.

If you are a musician who likes to play rock and roll, then you will need more guitars. The number of guitars that one needs can be determined by the type and style of music one plays. It’s not just about personal preference or what their favorite model is.

There are many reasons for why guitarists change guitars between songs. A guitarist’s number one priority is to provide the best possible sound for the audience.

The guitar must be in tune and good shape for the next song. No one wants to listen to an out-of-tune guitar that doesn’t match the key of the song.

Why do guitarists change tuning?

Using different tuning arrangements gives musicians the possibility for more sounds. Depending on what they need for certain parts, a new tuning can make this possible. Most performing artists will have guitars tuned to different arrangements. Just for this very purpose.

Do you really need two guitars?

If you are a performing artist, it can be a good idea to have a second guitar as a backup. But you do not need one. The only issue is that if you break a string on your only guitar, then the show could be over for you. Maybe even before it gets started.

So having a spare guitar can help make a difficult issue a rather simple one. It’s a good idea for peace of mind.