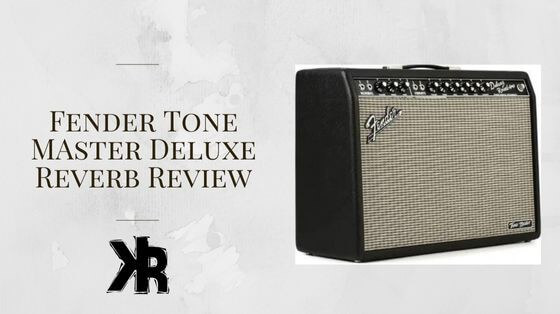 The Fender Tone Master Deluxe Reverb is a DSP-based modeling amplifier. It’s created to capture the sound of a Deluxe Reverb tube amp. The amplifier is a 1 speaker combo amp with built-in reverb and tremolo, just like the classic.

It’s easy to use and versatile enough to meet the needs of many playing styles. But is much lighter than the tube version. It has the same great looks and provides some very good sounds. This makes it an amp worth considering, even if it’s not a true valve amplifier.

My first impressions of this amplifier were very positive. It took me a few minutes to dial in a sound that I was very happy with, but I wasn’t upset with the initial tone at power-up. When compared to the real tube version, I felt like it was very close in sound, but only part of the way there in feel.

Let’s take a look at some key specs of the Fender Tone Master Deluxe Reverb:

If you want to see additional specifications, you can visit the Fender page here.

Who is This Amplifier For?

For anyone who has always been a fan of low gain, clean tones, this amplifier is for you. Whether you are a beginner or an advanced player, this recreation of a vintage classic is a great choice. The new features, controls, and sounds you will find in this amplifier will be a benefit to your music style.

Are you more of a Telecaster or Les Paul player? Need a light combo with big power? Then this amplifier will be a great fit for you.

The deluxe reverb is a 23-pound open-back combo amplifier, measuring 24″ wide, 17″ high, and 9.3″ deep. It’s equipped with one 12″ Neodymium Jensen speaker in a sturdy pine enclosure.

The enclosure is then finished with black Tolex and classic silver grill cloth. Controls on the amplifier are front facing. Just like the original tube version of the deluxe reverb. Even the vintage knobs scream old-school Fender, right down to the jeweled light.

The Foot Switch is easily stored in the back of the amp, which is nice. The handle is a pretty common unit, nothing fancy, but does contribute to the vintage look. The classic fender logo and labeling recreate the look of the original very nicely.

The amp is well-made overall and would be a good gigging amplifier. This version of the deluxe reverb is also a heck of a lot lighter than the tube version. Making it incredibly portable!

The Fender Tone Master Deluxe Reverb is a 2 Channel modeling amplifier. It has a familiar layout. The normal channel includes the standard volume, treble, and bass controls. Plus 2 inputs.

Channel two or the vibrato channel then kicks it up. It adds the reverb and tremolo controls just like the original. On the rear of the amplifier, you will find your power and standby switches. It’s awesome to see that they went as far as including a standby switch. All in order to reproduce the original as a digital amp.

Without tubes, there is no need for a standby switch, but it’s on this amp! Further down, you will find the variable output control. It provides 6 different output options.

The balanced output is a great addition to the amp. It allows you to take the dry signal out, or choose one of two cab sim options. You can select how much output signal is being sent out from the XLR connector!

A really cool feature here! Finally, the foot switch connector. It allows you to use the included foot switch to toggle reverb and tremolo.

The Fender Tone Master is 100 watts of solid-state output power and is a loud amplifier! For this amplifier, there is lots of power here. If you have a decently loud drummer, you will be fine.

This is one powerful amplifier, just like the 22-watt tube amp, it was created after. But don’t be afraid of the output power because like we said, it has variable output power settings! This means that you have the choice of 6 different power levels to choose from.

The balanced line out on this amplifier just screams versatility. Not only can you use this option to record, but you can also send it to the front of the house. The option to select between a couple of cab emulations as well is a great feature. We decided to put the XLR out to the test and record directly into our Direct Audio Workstation.

In this instance, we are using Pro Tools, and it sounds great! One of the issues with modeling amplifiers is the sound you get from the line out. It can easily be hit or miss, and in most cases, it’s a miss! But the Tone Master Deluxe Reverb is a hit for sure!

Fender did a great job designing this amplifier and did not just throw in a subpar Line Out! You will enjoy the sounds you can get when recording with the XLR line out.

The Fender Tone Master Deluxe Reverb comes with what’s called a Neodymium speaker. These speakers are up to 50% lighter than a speaker with a conventional speaker magnet.

Neodymium also possesses a powerful magnetic force. There is no loss of performance. This gives the amp a huge advantage. Not only does it sound great thanks to the power of the Neodymium magnet, but it’s also super light! And it’s a Jensen, so you know it’s a well-made speaker!

But Fender took care of making this possible with this deluxe reverb! And not only that, the foot switch is still small and light, but also included!

Beginning with the Normal channel and a Fender Nashville Telecaster. I was already super happy upon my first strum. If you know Fender, you also know that clean sound is a staple in this industry!

The Fender clean is alive and well in this digital representation of the real thing! The normal channel sounds great and breaks up almost like the real thing!

The Vibrato channel like the normal channel sounds great! The slight difference in sound again, just like the real thing. Although I found the tube amp version to be a bit bright on the vibrato channel, but not so here.

The sound was great and felt like I was playing a tube amp. In fact, I couldn’t believe it was a digital representation. The breakup was easy to do and seemed to happen sooner than the tube amp version.

Turning up the volume produced a break-up. But with a switch of the variable output on the back, the volume was lowered. Couldn’t do that with the original!

The reverb and vibrato emulations were quite good! I found the reverb to be a bit overbearing at higher levels. But for a digital reverb and tremolo, they sound very good. The foot switch was very handy in control of the effects.

Being the tech nerd I am, I opened up the amplifier and had a look inside. There are 4 small PC boards inside with surface mount components. It’s very basic, but the boards look like they are of high quality.

There is nothing inside that made me think it would be a problem. I believe the amplifier would be pretty reliable. The potentiometers feel good, and the connectors were rigid. Over all, I feel like this would be a dependable gigging amplifier that you can rely on for many years.

Conclusion and My Ratings

The Deluxe Reverb gets these review ratings:

There are many great electric guitar amplifiers on the market for under 1000. The Tone Master Deluxe Reverb is well worth the investment.

The digital representation of the classic deluxe reverb is pretty well spot on! I did notice that the tone master seemed to have more midrange compared to the tube amp of old. This is not a bad thing at all, the amp sounds great and feels pretty close!

The cleans on the Tone Master are just like the classic, and at times had me forget I was playing a digital amp. DSP programming has come a long way, and the Tone Master Deluxe Reverb is the amp to prove it!

The option to adjust the output power is a game-changer for this amplifier! One of the hurdles with the original is that if you wanted a good crunch tone, you also had a ton of volume to deal with! But not anymore, it’s now easy to get what you want and control the amp with ease!

For all other inquiries, you can find the manual here!

Is the Fender Tone Master Deluxe Reverb loud enough to gig with?

This amplifier has more power than most players will ever need. This means that you will have no problems playing gigs with this amp. Even if your drummer is a super loud hitter, rest assured there is plenty of volume.

Where is the Fender Tone Master Deluxe Reverb made?

This amplifier is made in China. But it’s built very well and assembled to be very rigid to hold up to even the roughest treatment when on the road.