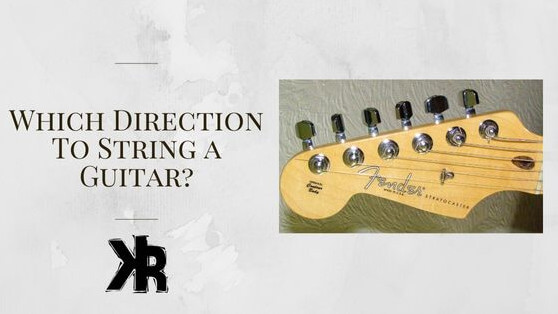 When new to the guitar, putting on new strings can be a nerve-wracking experience. This is after all a mechanical apparatus with moving parts. Each of them has a different gauge and must go on in the right position to play right. Does it matter which direction you string a guitar?

Yes, the direction in which the string is wound is important and must be correct. Incorrect winding can result in worn parts like the guitar nut. Interference between the strings and machine heads is also possible if this is not right.

Winding them around the tuners can be very difficult when learning how to use them. New strings are always longer than needed. So how do you determine the length before you start winding?

In this article, we are going to look at the correct direction to wind them around the tuners. This is an important thing to get right for the life of your strings and the performance of your guitar.

Does It Matter Which Direction You String a Guitar?

It’s very important to wind the string around your tuner in the correct direction. Putting them on wrong could result in broken strings. It can also cause premature nut wear and even interference with other tuners.

Because of the different headstock designs, it’s easy to get this wrong. Players who are new to one of the many designs need to pay close attention to how the nut and tuners are aligned. The tuners are positioned in line with the nut to prevent any hard angles.

If the string is pulled too far in one direction, not only will the nut wear sooner, but it could pop out of the grooves. Some headstock designs have two strings that come off the nut at an angle opposite to one another. This is also known as a Gibson design or 3 to one side. It’s about as far as you can angle them without experiencing any issues.

The one good thing about this particular headstock design is that it is hard to get it wrong. If you string the guitar in the wrong direction, it will make contact with other tuners. This will let you know that it’s not right. But most of the other designs will allow you to wind them backward. And if they are wound incorrectly, you would not know until trouble arose.

Thing is, it might be that something bad happens like a broken string, worn nut, or tuning issues. Some of these are hard to troubleshoot. And for a beginner, just ruins the experience in frustration.

Which Way Should Guitar Strings Be Wound?

The right way, of course! And yes, there is a way to keep this in mind when putting on new strings. First, set them on the bridge. Then determine the length. Have the right gauge string in the correct order, and are ready to wind the tuner. Then, keep this in mind.

The string will always need to start on the opposite side of the tuner button. The tuner button is the part that you turn to wind them. And so you will want to make sure the string starts on the post side, opposite the button.

And as long as they start on the opposite side of the button, you will have it right. When it comes to winding around a post, it’s not possible to use terms like, start on the right or the left side. Because of the many headstock designs, this will only confuse players, especially beginners.

If you have put the string on in the correct direction, the next thing to know is which way the button should be turned. Obviously, one way tightens and the other loosens. This much you should already know. All guitar tuners are universal in most cases. They will respond in the same manner when turned in either direction.

When tightening a guitar string, the tuning button should turn counterclockwise. If you want to loosen it, then you want to turn the button in a clockwise direction.

Be careful with some forum comments online. We have noticed a lot of people giving incorrect advice on this topic. There are still a lot of players who think that clockwise is to tighten a string, when it’s not. In this case, they may even have theirs on the tuners wrong.

If you put the string on correctly, as we mentioned above, it will adjust properly. This is important to know. Especially if you are using a guitar winder and will be turning the button very quickly. The last thing you need is to make a wrong move and break the string before you can even use it. This is very possible, so make sure to be turning in the correct direction.

We do recommend you use a winding tool. This will make the job much easier. Turning the buttons by hand is not convenient. Having the string pop off the post during winding is all too common for players. So do yourself a favor and get a good winder that will help you do this job efficiently.

We recommend the D’addario pro-winder. This is a winder and string cutter all-in-one tool. It’s about as convenient as one will need for a winder. And at the very least you should have this in your bag. If you want something that is powered, then the Ernie ball makes a great power winder, which only makes it easier.

Remember, you will change a lot of strings as a player. Having the right tool to make it easier will benefit you along the way. You don’t want to have changes become a frustration when you will need to do it more often than anything else.

This is one of those important things to memorize right from the beginning. This is because string changes are so common. And with so many headstock styles, it’s best to have it memorized for any future purchases. Because you know as well as I do, there will be more guitars in your future! Oh, and if you are putting nylon on a steel string guitar, the winding remains the same!