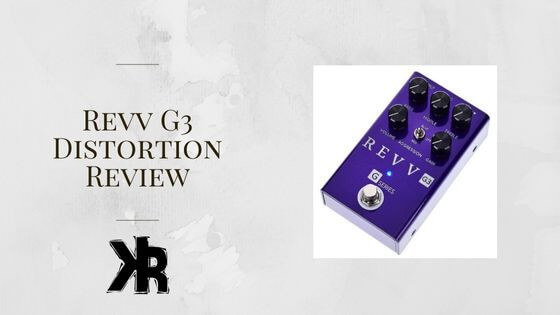 Revv Amplification is a Canadian company that is truly innovating its way to fame. They released some very popular tube heads. They have caught the attention of many players worldwide.

The G3 distortion is part of their Generator series pedal line. It’s a huge contender in the world of distortion stomp boxes. With some great EQ and switching options, the G3 may be just what your guitar sound is missing.

Let’s have a look at some key specs of the G3 Pedal!

The G3 is a great-looking distortion pedal made with a sleek aluminum enclosure. Measuring 4.76″ deep, 2.75″ wide, and 1.25″ high, this stomp box is a perfect fit on any board. The text on the unit is all laser engraved and will never come off!

The knobs on the device are made of metal, which is a great look as opposed to the normal plastic you find on other pedals. Each of the potentiometers when turned feels very rigid and will last for a long time. The aggression toggle switch is a short shaft and feels good when used. The controls are made of quality parts.

The foot switch is easy to press and feels solid when used. The LED to let you know it is ON is blue, which is also a nice feature.

The jacks are all top-mounted, which is a huge benefit for saving space on your pedal board. The package even included some rubber feet, should you want to stick them to the bottom of your pedal. Overall, a really well-made unit!

The G3 has some really great controls for a ton of sounds. The EQ on the device has a wide range of control. The fact that it has MID control is a huge benefit to the sound. The bass control really adds some major low end should you desire it. This is great in conjunction with the amount of saturation it can produce.

The aggression switch allows you to select 3 different levels of gain. As you switch the toggle between the positions, you can hear the difference in gain. Not only does it change the amount of gain, but low-end frequency response as well.

The signal output can be altered with volume control. It can really drive the front of an amp as well, which was pretty cool. The added drive from the amp and the tuned saturation level from the pedal made a great guitar metal tone.

The aggression switch is one of the main features of this pedal. The 3 positions each have the ability to transform what this device can do. The range of gain possible can take you from some gnarly hard rock tones to some incredible metal sounds.

The switch works really well in conjunction with the gain knob. The pedal can truly deliver, especially with the right guitar for your play style.

I love to see top-mounted jacks on pedals! The extra room possible on my board is very important to me and probably you as well.

This is worth the mention because I can add sometimes 2-3 more pedals on my board. It’s nice to see that Revv accomplished an amazing tone, but they were thinking of this as well.

The Revv G3 operates on 9 volts only. We inquired with Revv to see if it was possible to use it with 18 volts, but they suggested we do not.

We don’t feel this is a dealbreaker by any means. A higher voltage would increase headroom, which may not be ideal for the pedal. The aggression switch already allows for an insane range of gain.

The G3, being a completely analog distortion pedal, is also a true bypass. This is a very important feature. When the distortion is removed from the signal path, it’s great to know that it is not coloring the tone.

Some units that are not true bypass can buffer the signal. But sometimes they also affect your sound in sometimes unsatisfactory ways.

My first impression of the G3 was an excellent one. When starting to play, all control was at noon and the aggression switch was set to OFF. When activated with the foot switch, this pedal came roaring to life in the same way a tube amp would.

With the gain set to noon, I had a killer rock guitar tone like I’ve never had from another distortion stomp box. Switching the aggression toggle to blue mode and the saturation increases! Not only that, but the sound also became more mid-focused and had an incredible growl! The string clarity is on another level as this thing is super defined.

The range on the EQ is huge and allows you to dial in some incredible tones. Pushing the aggression switch down to RED took you then to a highly saturated lead sound that just blew me away. Never did I expect the pedal to sound so good and feel like a tube amp!

Yes, the hype around this pedal was huge when it was released. But now that I have had a chance to play it, I agree, it is as good as they say it is! Revv is newer to the world of gear, but man are they doing some incredible things.

Not only that, but they seem like great guys too. If you have never had a chance to play the G3, you need to fix that, and fast. You are missing out on one of the best pedals ever created. It’s worth taking the plunge, heck even selling other devices to get a G3 if you have to.

It will change your opinion on distortion pedals forever. If you already own the G3, make sure to also check out the RED channel pedal. Begin to build your own Generator amplifier!