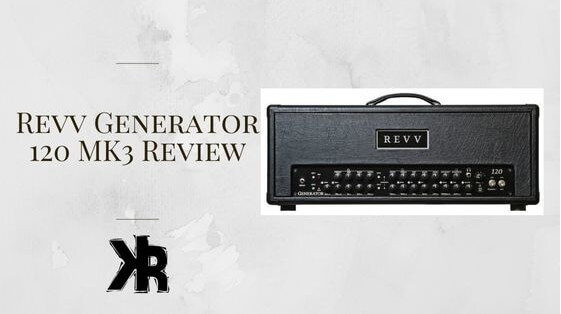 The Revv Generator 120 MK3 is the most impressive tube amplifier on the market today. This is an all-tube amplifier with onboard Two Notes speaker simulation. All these features are earth-shattering! Not only does this amplifier sound amazing, but the versatility is also like no other. To date, this is my favorite amp!

First, let’s have a look at some key specs of the Generator 120!

The Generator 120 is a 4-channel amplifier with some amazing controls and features. Each of the 4 channels has its own sound and flavor, ranging from clean to high gain.

The channels are changed via the push buttons on the front panel. Or the included foot controller or MIDI. Each of the 4 channels has its own tone stack and many tone-altering functions like bright, cut, and fat. Some newer features in the MK3 line are “Wide” on the clean channel and new drive levels on the crunch channel.

The amp is also loaded with the Two Notes Torpedo technology. This brings some amazing versatility to the table. This version of the torpedo is similar to the Captor X and features a stereo output on the rear of the amp. The Twin Tracker features can be turned on to create a stereo effect, which is pretty neat.

The amplifier also features Bluetooth to allow you to alter the Torpedo settings. Both from your Phone or mobile device. This is a great feature when playing live, as you can change your sound to best fit the venue.

Even though there are so many features in the amplifier, I found it to be well laid out and intuitive. And the gate on this amp, wow, just simply incredible!

The Revv Generator 120 is rated for 120 watts and boy does it scream! This is one loud amplifier that continues to sound amazing when cranked up.

The amp also has a 10-watt switch that brings the volume down. This is to allow you to crank it right up without the excessive volume, especially if you don’t need it.

Thanks to the built-in reactive load, you can also play this amp in your apartment without a speaker cab. The headphone jack and level control is placed nicely on the front panel.

This is an amp that will fit any scenario, from live shows to bedrooms to studios.

The Two Notes Remote software is found on their website. It can be installed into your computer to use the functions. There are many things that can be tweaked in the software, from EQ to a twin tracker to a noise gate.

There is a lot that can shape your cabs, and the presets as well, so make sure to take advantage of this software. You will find some crazy cool features.

You can also access it all via Bluetooth on your device, so there is no excuse to not at least take a look inside.

The new 120 MK3 now also features built-in Reverb. This is a digital reverb based on a spring-type sound. It is one of the best built-in reverb that I have tried on a tube head.

The level control is on the back of the amp and can be set to taste. Each channel can then either be set to have reverb or not, which is a great feature. It can also be toggled with MIDI.

The effects loop on the Generator MK3 is buffered and very simple to use. The design is a simple plug-and-play loop that provided a great experience.

We plugged in Reverb, and Delay pedals and the sound was rich and did not suck any tone. The loop on the amp is a serial loop found on the rear of the amp.

The Generator 120 MK III comes with some all-new presets. 6 new cab presets are loaded into the amplifier, which sounds absolutely incredible. The 120 has some feature sets that are like the G20. They allow you to save cabs to channels and aggression settings.

This is one neat feature, as now you can change channels and have a new cab sound to best fit your sound. Not only that, but the cabs can also be saved to the foot controller as well as be saved and accessed via MIDI. The possibilities with this amp are endless, as now you really don’t need a real cab at all.

One of the really cool new features of the amp is the noise gate. This gate is one of the tightest and most responsive gates I have ever tried on an amplifier. It has been well-designed, and the threshold can be set via the rear control. Each channel can be set to have the gate on or off, which was really handy. Once the gate kicks in, the amp is silent!

So now to the good bits, the marvelous tone this beast can provide.

Channel one is the clean channel and is a very rich and sparkling channel. The clean sound on this head is perfect and has a few added features that help shape it to your needs. The wide and bright switches really allow you to alter the sound and even push it to provide somebody. Just has a great, clean sound!

Channel two is the crunch channel and has been re-voiced according to Revv. It is one amazing-sounding crunch channel for a multichannel head. I was able to get some amazing vintage sound out of the amp that I never expected to get. There are 3 drive settings and a bright switch. They get into an old-school vintage Marshall sound. And quite easily.

Channel 3 is the purple channel and is the first of the high-gain channels. This channel is very tight and articulate. But it has this incredible punch I’ve not experienced before. The bright cut and fat switches allow you to alter the sound to best fit your needs. The Fat switch, however, adds an incredible low end that takes you from tight to loose depending on what you need.

Channel 4 is the “red” channel and is even more aggressive than purple. It sports the same options and gets into some throaty grinding distortion that is just so much fun. It’s almost dual recto-like, but it’s a Revv flavor for sure.

The sound of this amp on every channel is incredible! And the price is right on par!

I have played a great number of tube heads in my day and have to say, this is the one that takes first place. I have played the 120 MK2 in the past and really liked it, but this new version caught me off guard!

The sound and features are nothing I have ever played before. It can get into pretty much any tone you could ever ask for. The Two Notes Torpedo and built-in Reactive load provide amazing versatility.

The noise gate and reverb are not a quick marketing gimmick, but are some crazy good features! Plus, the Bluetooth capabilities could be handy at a gig. Especially where you could adjust your sound from the sound guy’s booth.

There are also 2 new amps that are part of the MK III series, the 100P, and 100R. These are 3 channel amps with all the same features and killer sounds. If 2 high-gain channels are overkill for you, then a 3 channel amp might be what you are after!

This is one incredible amp, nice job Revv, you knocked it out of the park! Anyone on the fence with this head should have no fear, as this is the amplifier you NEED to own. Heck, even sell the ones you currently own to buy it!