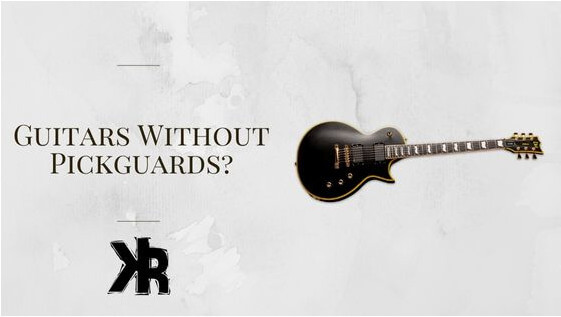 You love the look of a guitar without a pickguard, but you’re not sure if it’s safe to play without one. Why do some guitars not have pickguards?

There are a few reasons why this might be the case. Sometimes it is an aesthetic choice. The guitar manufacturer decided that they want the instrument to look a certain way. That a pickguard would spoil that design. Other times, it’s necessary to protect the finish of the instrument from damaged.

The Fender Stratocaster is a good example of a model that needs one as part of the design. In this article, we are going to take a closer look at why some have them and why others don’t!

What is the Purpose of a Pickguard?

A pickguard is a plastic plate that covers the exposed part of your guitar’s body below the strings. It’s placed in the strumming area or around the pick-ups. The purpose of this guard is to protect against damage to the finish or wood due to strumming and picking.

Over time, as the pick makes contact with your guitar body, the finish will begin to wear away or scratch. This begins with a dull look to the finish until it eventually begins to break down altogether.

Some people also use them for decoration. Its great-looking design can really give the guitar its own personality. But are pickguards necessary?

Some Guitars Don’t Have a Pickguard

There are a few reasons why some guitars don’t have pickguards. It’s either because they’re not needed to protect against damage. Or because it’s part of the aesthetic design of that particular model. Most acoustic and electric guitars have a guard as standard. But classical models do not because they are always played with the fingers.

In some cases, it’s necessary for the guitar to have a pickguard because it is part of the design structure. Not only does it support the pickups, but it also covers body cavities. The design normally includes areas that are more susceptible to scratches. Usually, because of the play style that it’s capable of.

Pickguards also do have a very small effect on the tone of your guitar. This is why some people choose to remove them if they’re not needed for protection. If you’re not worried about minor scratches or don’t use a pick, then there’s no real need to keep it on. But this comes down to how you play and strum.

At the end of the day, it’s up to you whether you want to keep the pickguard on your guitar. If it’s there for protection then it’s a good idea to leave it on, but if it’s just for decoration then feel free to take it off!

Is the Finish Really That Delicate?

Guitars without pickguards do exist, and they’re generally pretty safe to play. The reason why some don’t have guards is that they’re not necessary, the finish is quite tough and can take a bit of abuse.

But this depends on the finish. For example, some acoustic guitars will scratch and scuff much faster. Especially when compared to an electric guitar with a layered polyester coating. And so it is better to keep a pickguard on an acoustic with a more delicate finish than some electrics.

Hollow-body guitars are somewhat similar and can have a delicate finish. So you will want to find a pickguard that is used to deflect any aggressive downward strumming.

Playing your guitar without a pickguard? Then it’s important to take a few precautions to avoid damage.

Does a Pickguard Affect Tone?

When you install a pickguard on your guitar, it can have a small impact on certain types and the tone they produce. A steel string acoustic will be slightly dampened as the guard is put on. Especially when on the soundboard of the body. But this will essentially be unnoticeable to the ear.

Classical guitars being a lighter construction might be affected. More than any other type. But because they are primarily used with the fingers, they also don’t need one. An electric guitar will not suffer any tonal loss. The signal produced is captured utilizing magnetic fields. There is no soundboard that produces any volume or tone.

Because any dampening effect is so negligible, you can ignore it. This is why so many manufacturers put them on many of their guitar models.

How to Remove a Pickguard

There might come a time when you want to remove the pickguard from your guitar. This could be because you don’t need it, or maybe you want to change the color or design. Whatever the reason may be, here is how you can do it!

If your pickguard is attached using an adhesive, it might be a little more difficult to remove. It depends on the type of adhesive used and how long it has been bonded.

If it has been on long, keep in mind that the finish underneath may not have discolored. This will mean you will have an outline of the pickguard on your top. If your guitar is older, you may want to leave it there.

If you are not comfortable removing it yourself, it is best to consult a professional to do it for you.

How to Install a Pickguard

Installing an adhesive-backed pickguard can essentially be done by anyone who is confident. This is a great way to add a guard to your acoustic guitar.

When it comes to an electric guitar, you can also use this method. But normally a pickguard is screwed to this type. And so if you want to install a guard to an instrument that has never had one, it is best to work this out with a luthier.

Pickguards can also come in a clear variety. This is great for those who want the natural wood of their guitar to show through. Without any obstruction. There are two types of clear pickguards. One that is see-through and one that has a smoked effect.

The see-through guard will have all the same properties as a regular one. It will protect your guitar body from a pick or the strumming hand while you play.

The smoked effect is a favorite as it gives the guitar an older, vintage look to it. They are both a great way to customize yours without making any permanent changes!

Do all Guitars Have a Pickguard?

While most guitars come stock with a pickguard, there are some that do not. A manufacturer may decide not to put one on because of aesthetic design. They also make sure to apply a hard finish that can withstand pick impact.

While you may need to hunt one down, they do exist and can be purchased if that is more your preference.

How thick are Electric Guitar Pickguards?

The pickguards found on an electric guitar are normally much thicker. Especially when compared to the ones found on an acoustic guitar. You will find that there are many plastic layers built up to get as thick as .100″ or one hundred thousand an inch.

If they are a structural part of the guitar design, then they need to be thick for strength.

Why is a Les Paul Pickguard Raised?

If you look closely, the body carve is not flat on top. This creates a difficult shape to mount a plastic pickguard. Gibson added the floating guard to protect the finish. But to use a flat piece of plastic held in place by a metal brace to work around the carved top.

There is a nice thing about the design. If you decide to take it off, there are not any ugly screw holes left behind.

So why do some guitars not have pickguards? One of two reasons, really. Either the manufacturer did not install them because of aesthetics. Or the owner has removed them! In the case of a classical guitar, there is no need for one, as a pick is not used in most cases.

So if the pickguard is not your thing, then you do have some options. There are some beautiful models that don’t use them. But if they are, they can also be a great place to put your stickers!